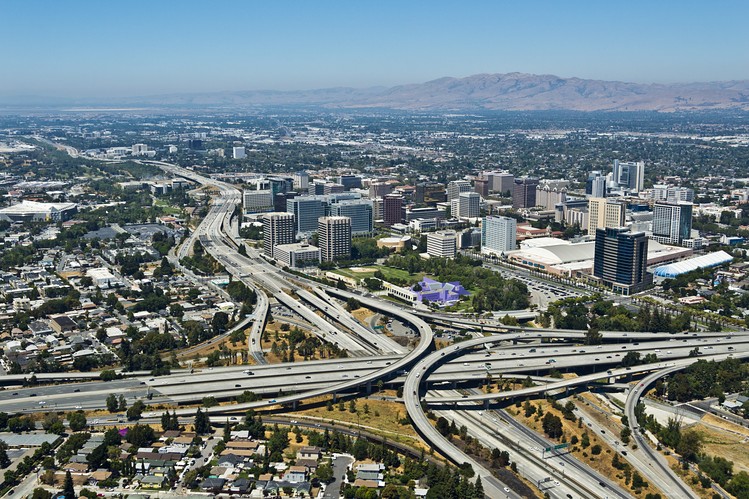 The word "valley" refers to the Santa Clara Valley, where the region has traditionally been centered, which includes the city of San Jose and surrounding cities and towns. The word "silicon" originally referred to the large number of silicon chip innovators and manufacturers in the region. The term "Silicon Valley" eventually came to refer to all high tech businesses in the area, and is now generally used as a synecdoche for the American high-technology economic sector. It also became a global synonym for leading high-tech research and enterprises, and thus inspired similar named locations, as well as research parks and technology centers with a comparable structure all around the world.

Silicon Valley is a leading hub and startup ecosystem for high-tech innovation and development, accounting for one-third of all of the venture capital investment in the United States. It was in the Valley that the silicon-based integrated circuit, the microprocessor, and the microcomputer, among other key technologies, were developed. As of 2013, the region employed about a quarter of a million information technology workers

Origin of the term

Report for Silicon Valley is attributed to Ralph Vaerst, a local entrepreneur. Its first published use is credited to Don Hoefler, a friend of Vaerst's, who used the phrase as the title of a series of articles in the weekly trade newspaper Electronic News. The series, entitled "Silicon Valley in the USA", began in the paper's January 11, 1971, issue. The term gained widespread use in the early 1980s, at the time of the introduction of the IBM PC and numerous related hardware and software products to the consumer market. The Silicon part of the name refers to the high concentration of companies involved in the making of semiconductors (silicon is used to create most semiconductors commercially) and computer industries that were concentrated in the area. These firms slowly replaced theorchards and the fruits which gave the area its initial nickname — the "Valley of Heart's Delight."

Silicon Valley was born when several contributing factors intersected, including a skilled STEM research base housed in area universities, plentiful venture capital, and steady U.S. Department of Defense spending. Stanford University leadership was especially important in the valley's early development. Together these elements formed the basis of its growth and success.

The first ship-to-shore wireless telegraph message to be received in the US was from the San Francisco lightship outside the Golden Gate, signaling the return of the American fleet from the Philippines after their victory in theSpanish–American War. The ship had been outfitted with a wireless telegraph transmitter by a local newspaper, so that they could prepare a celebration on the return of the American sailors. Local historian Clyde Arbuckle states in Clyde Arbuckle's History of San Jose that "California first heard the click of a telegraph key on September 11, 1853. It marked completion of an enterprise begun by a couple of San Francisco Merchants' Exchange members named George Sweeney and Theodore E. Baugh…" He says, "In 1849, the gentleman established a wigwag telegraph station a top a high hill overlooking Portsmouth Squares for signaling arriving ships… The operator at the first station caught these signals by telescope and relayed them to the Merchant's Echange for the waiting business community." Arbuckle points to the historic significance the Merchants Exchange Building (San Francisco) and Telegraph Hill, San Francisco when he goes on to say "The first station gave the name Telegraph to the hill on which it was located. It was known as the Inner Station; the second, as the Outer Station. Both used their primitive mode of communication until Messrs. Sweeney and Baugh connected the Outer Station directly with the Merchants's Exchange by electric telegraph Wire."

According to Arbuckle (p. 380-381) Sweeney and Baugh's line was strictly an intra-city, San Francisco based service; that is until California State Telegraph Company enfranchised on May 3, 1852; whereas, O.E. Allen and C. Burnham led the way to "build a line from San Francisco to Marysville via San Jose, Stockton, and Sacramento." Delays to construction occurred until September 1853; but, "…San Jose became the first station on the line when the wire arrived here on October 15. The line was completed when [James] Gamble's northbound crew met a similar crew working southward from Marysville on October 24."

The Bay Area had long been a major site of United States Navy research and technology. In 1909, Charles Herrold started the first radio station in the United States with regularly scheduled programming in San Jose. Later that year, Stanford University graduate Cyril Elwell purchased the U.S. patents for Poulsen arc radio transmission technology and founded the Federal Telegraph Corporation (FTC) in Palo Alto. Over the next decade, the FTC created the world's first global radio communication system, and signed a contract with the Navy in 1912.

In 1933, Air Base Sunnyvale, California, was commissioned by the United States Government for use as a Naval Air Station (NAS) to house the airship USS Macon in Hangar One. The station was renamed NAS Moffett Field, and between 1933 and 1947, U.S. Navy blimps were based there. A number of technology firms had set up shop in the area around Moffett Field to serve the Navy. When the Navy gave up its airship ambitions and moved most of its west coast operations to San Diego, the National Advisory Committee for Aeronautics (NACA, forerunner of NASA) took over portions of Moffett Field for aeronautics research. Many of the original companies stayed, while new ones moved in. The immediate area was soon filled with aerospace firms, such as Lockheed.

The Bay Area was an early center of ham radio with about 10% of the operators in the United States. William Eitel, Jack McCullough, and Charles Litton, who together pioneered vacuum tube manufacturing in the Bay Area, were hobbyists with training in technology gained locally who participated in development of shortwave radio by the ham radio hobby. High frequency, and especially, Very high frequency, VHF, transmission in the 10 meter band, required higher quality power tubes than were manufactured by the consortium of RCA, Western Electric, General Electric, Westinghouse which controlled vacuum tube manufacture. Litton, founder of Litton Industries, pioneered manufacturing techniques which resulted in award of wartime contracts to manufacture transmitting tubes for radar toEitel-McCullough, a San Bruno firm, which manufactured power-grid tubes for radio amateurs and aircraft radio equipment.

Stanford University, its affiliates, and graduates have played a major role in the development of this area.[12] Some examples include the work of Lee De Forest with his invention of a pioneering vacuum tube called the Audion and the oscilloscopes of Hewlett-Packard.

A very powerful sense of regional solidarity accompanied the rise of Silicon Valley. From the 1890s, Stanford University's leaders saw its mission as service to the West and shaped the school accordingly. At the same time, the perceived exploitation of the West at the hands of eastern interests fueled booster-like attempts to build self-sufficient indigenous local industry. Thus, regionalism helped align Stanford's interests with those of the area's high-tech firms for the first fifty years of Silicon Valley's development.

During the 1940s and 1950s, Frederick Terman, as Stanford's dean of engineering and provost, encouraged faculty and graduates to start their own companies. He is credited with nurturing Hewlett-Packard, Varian Associates, and other high-tech firms, until what would become Silicon Valley grew up around the Stanford campus. Terman is often called "the father of Silicon Valley".

In 1956 William Shockley, the creator of the transistor, moved from New Jersey to Mountain View, California, to start Shockley Semiconductor Laboratory to live closer to his ailing mother in Palo Alto. Shockley's work served as the basis for many electronic developments for decades.

In 1953, William Shockley left Bell Labs in a disagreement over the handling of the invention of the transistor. After returning to California Institute of Technology for a short while, Shockley moved to Mountain View, California, in 1956, and founded Shockley Semiconductor Laboratory. Unlike many other researchers who used germanium as the semiconductor material, Shockley believed that silicon was the better material for making transistors. Shockley intended to replace the current transistor with a new three-element design (today known as the Shockley diode), but the design was considerably more difficult to build than the "simple" transistor. In 1957, Shockley decided to end research on the silicon transistor. As a result of Shockley's abusive management style, eight engineers left the company to form Fairchild Semiconductor; Shockley referred to them as the "traitorous eight". Two of the original employees of Fairchild Semiconductor, Robert Noyce and Gordon Moore, would go on to found Intel.

By the early 1970s, there were many semiconductor companies in the area, computer firms using their devices, and programming and service companies serving both. Industrial space was plentiful and housing was still inexpensive. The growth was fueled by the emergence of the venture capital industry on Sand Hill Road, beginning with Kleiner Perkins in 1972; the availability of venture capital exploded after the successful $1.3 billion IPO of Apple Computer in December 1980.

Thousands of high technology companies are headquartered in Silicon Valley. Among those, the following are in the Fortune 1000: 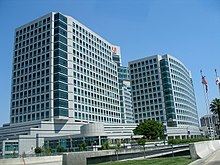 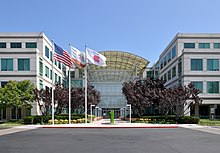 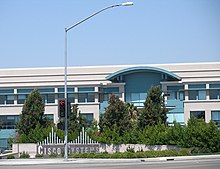 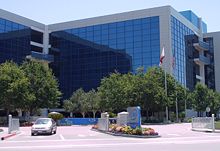 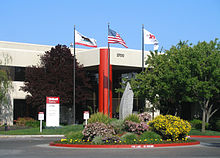 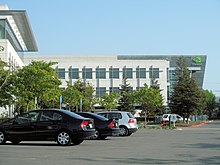 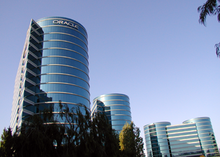 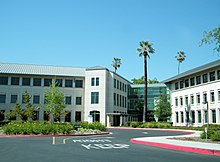 Additional notable companies headquartered (or with a significant presence) in Silicon Valley include (some defunct or subsumed):

The following Santa Clara County cities are actually located in the Santa Clara Valley and based on that status are traditionally considered to be in Silicon Valley (in alphabetical order):

The following Bay Area cities are (or were) home to various high-tech companies (or related firms like venture capital firms) and have thereby become associated with Silicon Valley: