Mountain View is a city located in Santa Clara County, California, United States, named for its views of the Santa Cruz Mountains. From its origins as a stagecoach stop, it grew to a large suburb with a pedestrian-friendly downtown, free wi-fi, and a population of 74,066. The city borders Palo Alto and the San Francisco Bay to the north and Los Altos and Moffett Federal Airfield and Sunnyvale to the south.

Situated in the southern end of the San Francisco Peninsula, Mountain View is home to many high technology companies. In 1956, Shockley Semiconductor Laboratory, the first company to develop silicon semiconductor devices in what came to be known as Silicon Valley, was established in the city by William Shockley. Today, many of the largest technology companies in the world are headquartered in the city, including Google, Mozilla Foundation, Symantec, and Intuit. 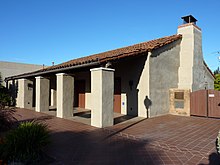 The Historic Adobe Building was constructed as a Works Progress Administration project in 1934.

The Mexican land grant of Rancho Pastoria de las Borregas was given in 1842 by Alta California Governor Juan Alvarado to Francisco Estrada. This grant was later passed on to Mariano Castro, who sold half of the land to Martin Murphy, Jr. Eventually, the former land grant became the cities of Mountain View and Sunnyvale.

Mountain View had its beginnings in the late 19th century as a stagecoach stop on the route between San Francisco and San Jose, including the Butterfield Overland Mail. Incorporated on November 7, 1902, the town's early growth was due to agriculture, which remained the primary industry into the middle of the 20th century. After World War II, the population grew significantly with the development of the aerospace and electronics industries. Between 1950 and 1960, the population grew from 6,563 to 30,889, an increase of 370.7%.

Today, high technology is the foundation of the local economy, and there exist few remnants of the city's agricultural past. In 1990, Kevin Duggan began his position as city manager. He built a relationship with Google, Inc., and issued a long-term lease to that and other technology companies. As of 2014, those leases generate over $5 million per year in city revenue. Duggan reinstituted a special tax district for the Shoreline area, which was a landfill and pig farm in 1990. That money allowed the city to create a large park and golf course on the site. The Castro Street downtown area also benefitted from a special tax district.

To the west lie the Santa Cruz Mountains, after which the city is named and which separate it from the Pacific Ocean. To the east lies the Diablo Range. Both ranges, which together form the boundaries of the Santa Clara Valley, are visible from many parts of the city.

Most of Mountain View consists of residential neighborhoods. Business parks are located mostly in the North Shoreline neighborhood, north of Highway 101, and east of Highway 85.

Mountain View has a warm-summer Mediterranean climate (Köppen climate classification Csb: dry-summer subtropical). Summers are warm and dry, while winters are mild and wet. However, both summers and winters are somewhat moderated due to its relative proximity to the Pacific, although it has a lesser maritime influence than San Francisco further north on the peninsula.

Mountain View has a pedestrian-friendly downtown centered on Castro Street. The downtown area consists of the seven blocks of Castro Street from the Downtown Mountain View Station transit center in the north to the intersection with El Camino Real in the south. The transit center links the Caltrain commuter rail and Santa Clara Valley Transportation Authority (VTA) light rail and bus systems.

Four blocks with a concentration of restaurants, cafes, and shops extend south from the downtown station. Chez TJ, one of the few restaurants rated by the Michelin Guide in the Bay Area, is located a block from Castro Street on Villa Street. Tied House, located next door, was one of the first brewpubs in the Bay Area, and is a popular stop in downtown. 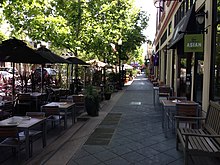 The core of downtown is the plaza shared by City Hall, the Mountain View Center for the Performing Arts (MVCPA) and the Mountain View Public Library. The plaza is used for many community gatherings and events, and features a collection of public art. Peninsula Youth Theatre and TheatreWorks are among the home companies of the MVCPA. The City Hall and MVCPA complex, designed by William Turnbull of San Francisco, opened in 1991. Behind those buildings is Pioneer Park, formerly the site of Mountain View's first cemetery.

Since 1971, the city has held the annual Mountain View Art & Wine Festival on Castro Street by closing down the street to traffic for two days. There is a farmer's market in the Caltrain parking lot every Sunday morning. Every summer, once a month, the city celebrates Thursday Night Live by closing off Castro street to cars and providing live music events and car shows on Castro Street.