The town was first settled in 1777. The area that now makes up downtown was first settled twenty years later, when the town of San Jose moved somewhat inland from its original location on the banks of the Guadalupe River. In 1850, San Jose incorporated to become California's first city and the location of California's first state capitol. The downtown area was typical of a small, agriculture-based city of under 100,000 residents until city manager A. P. Hamann spearheaded aggressive expansion during the 1950s and '60s. As the city rapidly expanded into outlying areas, the downtown area entered a period of decline. In the 1980s, mayor Tom McEnery, whose family owned several buildings in downtown, initiated significant gentrification in the area. The San Jose Redevelopment Agency, the largest such group in the state, would eventually become a key player in revitalizing the downtown area and, to a lesser extent, surrounding neighborhoods. In some cases, historic downtown buildings were bulldozed in order to make room for new hotels, office space, condominiums, museums, theaters and parks; to widen or re-align streets, and to build parking lots and garages. 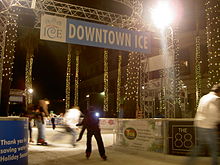 The San Jose Downtown Association hosts its annual "Skating Under the Palms" event during the winter holiday season.

Downtown San Jose buildings are not allowed to exceed 27 stories in height (The 88 Tower is the tallest at 286 feet, one foot taller than City Hall), due to their close proximity to the Mineta San Jose International Airport flight path. Despite the height restrictions, the area is home to many of the city's landmarks, including the headquarters of Adobe Systems, BEA Systems, the San Jose Museum of Art, the Children's Discovery Museum of San Jose, the Tech Museum of Innovation, the San Jose Museum of Quilts & Textiles, the San Jose Repertory Theatre, the San Jose Stage Company, the historic De Anza Hotel, the Fairmont Hotel, the Cathedral Basilica of St. Joseph, the campus of San Jose State University and the Dr. Martin Luther King Jr. Library. The SAP Center, just west of Guadalupe Parkway, is also normally considered to be part of the downtown community.

Downtown also is home to several important network service providers and Internet service providers, many of them located in Market Post Tower. Although the cost of office and technical space is relatively high downtown, this is offset by the low cost of peering and internetworking, an effect of proximity to other networking companies.

Many of the public areas of downtown San Jose are covered by a public, free, Wi-Fi network, including the areas surrounding Plaza de César Chávez and San Pedro Square. Downtown is also the hub of the VTA's light railsystem, and the home of the main campus of San Jose State University. Many of the 19th century buildings in central downtown appear on the National Register of Historic Places, in particular the area surrounding St. James Park, such as Trinity Episcopal Cathedral.

The residential areas of Downtown San Jose are now both inside the downtown core and surrounding the core. Downtown residents are known for their civic engagement, as evidenced by more than two dozen active neighborhood associations in the area. Despite widespread destruction caused by the 1906 San Francisco earthquake, a number of neighborhoods still retain their original, pre-1906 housing stock. These neighborhoods include the South University, Naglee Park, Hensley Historic District, Reed Historic District and Vendome neighborhoods. Downtown San Jose's early 20th century housing is diverse and includes many smaller Victorian homes along with a few fairly large gingerbread or Italianate-style Victorians, Craftsman, Mission and California Bungalow architecture in the neighborhoods surrounding the downtown core.

As part of its apparent effort to stimulate economic growth and increase tax revenue within the downtown community, the San Jose Redevelopment Agency began encouraging builders to construct high-rise residential towers, and the agency offered subsidies and lifted the requirement to provide affordable units that were characteristic of other redevelopment projects throughout the city.[3] The agency’s master plan has incorporated high-rise condominiums since 1980.[4] In 2008, the city’s first high-rise project began selling units.[3] Construction or planning has begun on at least seven additional high-rise projects. The agency states the high-rises will contribute to the creation of a more vibrant and well-to-do downtown culture.[3]

Southeast entrance of the King Library

Downtown San Jose is home to the campus of San Jose State University. SJSU is the founding campus of the California State University system and the oldest public university on the west coast of the United States. SJSU enrolls approximately 31,000 students.

The Dr. Martin Luther King, Jr. Library, shared by the city of San Jose and San Jose State University, is located on the campus of San Jose State University in downtown San Jose. The King Library represents the first collaboration of its kind between a university and a major U.S. city, and has won numerous awards including the Library Journal's prestigious 2004 Library of the Year award, the publication’s highest honor.[5] The library first opened its doors in 2003.