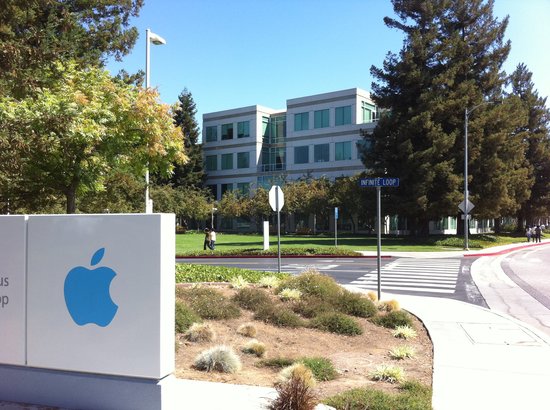 Cupertino was named after Arroyo San José de Cupertino (now Stevens Creek). The creek had been named by Spanish explorer Juan Bautista de Anza's cartographer, who named it after Saint Joseph of Cupertino. (Saint Joseph was born Giuseppe Maria Desa, and later known as Giuseppe da Copertino.) Cupertino was named after the town of Copertino in the Apulia region of Italy. The name Cupertino first became widely used when John T. Doyle, a San Francisco lawyer and historian, named his winery on McClellan Road "Cupertino". After the turn of the 20th century, Cupertino displaced the former name for the region, which was "West Side".

Although the meaning of "Copertino" is uncertain, it is likely a compound word meaning "little (covered) shelter." The -ino suffix in Italian words indicates "small" or "little", while "coprire" in Italian means "to cover", and "coperto" is derived from the Latin "coopertus," which means "covered shelter."

Cupertino in the 19th century was a small rural village at the crossroads of Stevens Creek Road and Saratoga-Mountain View Road (also known locally as Highway 9; later Saratoga-Sunnyvale Road, and then renamed to De Anza Boulevard within Cupertino city limits). Back then, it was known as the West Side and was part of Fremont Township. The primary economic activity was fruit agriculture. Almost all of the land within Cupertino's present-day boundaries was covered by prune, plum, apricot, and cherry orchards. A winery on Montebello Ridge overlooking the Cupertino valley region was also operating by the late 19th century.

Soon railroads, electric railways, and dirt roads traversed the West Side farmlands. Monta Vista, Cupertino's first housing tract, was developed in the mid-20th century as a result of the electric railway's construction.

After World War II, a population and suburban housing boom dramatically shifted the demographics and economy of the Santa Clara Valley, as the "Valley of Heart's Delight" was beginning to transform into "Silicon Valley". In 1954, a rancher, Norman Nathanson, the Cupertino-Monta Vista Improvement Association, and the Fact Finding Committee, began a drive for incorporation. On September 27, 1955, voters approved the incorporation of the city of Cupertino (225 voted "yes" and 183 voted "no"). Cupertino officially became Santa Clara County's 13th city on October 10, 1955. The first city council consisted of Ralph Lindenmayer, Werner Wilson, John Saich, R. Ivan Meyerholz and Norman Nathanson. Lindenmayer was selected as the first mayor of Cupertino a week after the September 27 election.

A major milestone in Cupertino's development was the creation by some of the city's largest landowners of VALLCO Business and Industrial Park in the early 1960s. Of the 25 property owners, 17 decided to pool their land to form VALLCO Park, 6 sold to Varian Associates (property later sold to Hewlett-Packard), and two opted for transplanting to farms elsewhere. The name VALLCO was derived from the names of the principal developers: Varian Associates and the Leonard, Lester, Craft, and Orlando families. A neighborhood outdoor shopping center and, much later, the enclosed Vallco Fashion Park, briefly renamed Cupertino Square, were also developed.

De Anza College opened in 1967. The college, named for Juan Bautista De Anza, occupies a 112-acre (0.45 km2) site that was the location of a winery built at the turn of the 20th century, called Beaulieu by its owners, Charles and Ella Baldwin. Their mansion has now become the California History Center. De Anza College now has about 22,000 students and is a hub of activity in the city. Its flea market, held the first Saturday of the month, attracts thousands from around the area.

Housing developments were rapidly constructed in the following years as developers created neighborhoods, including Fairgrove, Garden Gate, Monta Vista, Seven Springs, and other developments. The city is known for its high real estate prices.

On December 1, 2009, Cupertino became the first city in Northern California to have an Asian-American-majority city council.
source: wikipedia