Everything You Need to Know About Campbell, California!

Campbell was founded by Benjamin Campbell, after whom the city was named. He came to California in 1846 with his father, William Campbell. William started a sawmill in Saratoga and surveyed the cities of San Jose and Santa Clara. In 1851, Benjamin bought 160 acres (0.65 km2) in southern Santa Clara Valley and cultivated hay and grain on it. This area later became Campbell's historical downtown core.

About a third of Campbell was a part of the 1839 Alta California Rancho Rinconada de Los Gatos land grant. The Northern extent of the granted land was along present-day Rincon Avenue and across the North end of John D. Morgan Park in central Campbell.

In 1878, Campbell sold his land for $5 an acre to a railroad company. By 1887, the first subdivision was recorded west of the railroad from Campbell Avenue to the spot where the Water Tower Plaza now stands. The area became the center for shipping fruit grown in the surrounding area, and within a short time, the drying grounds and canneries made Campbell an important rail center. The Campbell Fruit Growers' Union became a well-known cooperative with its 17-acre (69,000 m2) drying yard. J.C. Ainsley Packing Company, Hyde Cannery, and Payne Cannery were the main fruit packing companies. The Bank of Campbell was founded in 1895.

Campbell was officially incorporated as a city in 1952. The city then grew rapidly as orchard lands disappeared tract by tract. Today, Campbell is a suburban residential neighborhood in the southern part of the Santa Clara Valley.

Schools Links in Campbell. Click here for all schools.

In the early 1990s, the Ainsley House a unique English Tudor-style house built in 1925, was moved from its original site at the corner of Hamilton and Bascom Avenues (the current site of eBay's headquarters) to the downtown quad and furnished with many of the Ainsley family's original furnishings. It has become the centerpiece for the Ainsley House and Campbell Historical Museum, which houses additional exhibits in the nearby old firehouse. The Ainsley House was built in the style of English country cottages for John Colpitts Ainsley, a canning pioneer in Santa Clara County, which was at the time known for its vast spreads of fruit orchards. 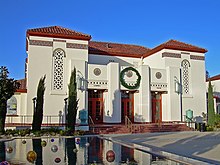 The Campbell Community Center is located on the northwest corner of Winchester and Campbell Avenues, in the building that used to be Campbell High School, the original school in the Campbell Union High School District. The Redwood Tree, stood at the corner of Winchester Boulevard and Campbell Avenue was originally planted there on May 11, 1903 by then President, Teddy Roosevelt and was relocated to nearby Vasona Park in Los Gatos.

The city acquired Campbell High School on August 1, 1985, five years after the school shut down. The Heritage Theater, formerly the high school's auditorium, was reopened after renovations in 2004 as an entertainment and event venue. The Community Center holds classes, and portions are available to be rented for various events. 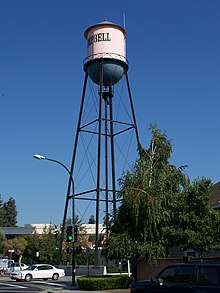 The Campbell Water Tower is a highly visible remnant of Campbell's "small town" past and located on the site of the original city water company and pumping plant near downtown.

Campbell used to be the home of the Winchester Drive-In Theater (now a business park) and is also home to a number of public parks that include John D. Morgan Park, Campbell Park, Edith Morley Park (the site of the city's community garden program), Jack Fischer Park, the Los Gatos Creek Trail Park, Orchard City Green, and Stojanovich Family Park. 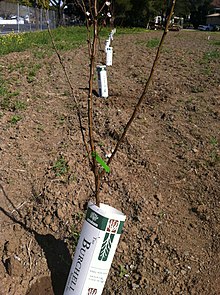 Blenheim apricot trees planted in 2013 on the Dubcich farm

The Dubcich farm located on West Campbell Ave. near Morgan Park is Campbell's last remaining piece of agricultural property and connection to the city's agrarian origins. It is still intact with its original farm house dating back to the 1920s, barn, and fruit trees.