The New Almaden quicksilver mine in the Capitancillas range in Santa Clara County, California, United States, is the oldest and most productive quicksilver (i.e., mercury) mine in the U.S.[4][5] The site was known to the Ohlone for its cinnabar long before a Mexican settler became aware of the ores in 1820. By the time they were identified as mercury, the mine was perfectly timed to supply the California Gold Rush. The mine ran intermittently after 1927 and eventually closed. It was purchased by the county and is now part of Almaden Quicksilver County Park.

Cinnabar, bright red mercury ore, was used by the Ohlone people for paint. Andres Castillero, a captain in the Mexican Army, obtained a grant to the mine in 1846 but, occupied with his military duties during the Mexican War, soon sold it to Barron, Forbes Company, an English textile firm based in Tepic, Mexico. It was named "Nueva Almaden" by Alexander Forbes. Castillero's mining claim was confirmed by the Board of Commissioners that evaluated private land claims in California on January 8, 1856, but there was continued litigation in the District court, The United States vs. Andres Castillero. A claim of fraud was made on behalf of the Quicksilver Mining Company, which had acquired a competing land claim originating in an agricultural claim to the land the mine was on. On appeal to the Supreme Court of the United States the claim was found invalid in a decision rendered March 10, 1863. One of the competing land claims was Rancho Los Capitancillos.

In 1863, acting on information that title to the mine had not been proven, Abraham Lincoln attempted to seize the mine, but the federal agent and deputy federal marshal were met at the mine gates by armed miners. Mindful of the possibility of losing the loyalty of California during the Civil War, the federal government backed off and Barron, Forbes Company was allowed to sell it to American investors for $1.75 million. 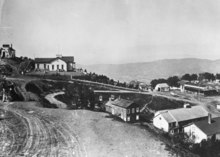 The mineralized area in the Almaden mining district where the New Almaden and the nearby Guadalupe mine are located is within the large Franciscan Assemblage associated with the Coast Range. Quicksilver ore deposited by hydrothermal deposition of cinnabar from deep within the earth is found in a gangue of silica-carbonate rock formed locally by hydrothermal alteration of serpentine. The Guadalupe mine produced about 10% as much mercury as the New Almaden. There are several smaller mines in the mining district, but their ore production was not significant. The only significant quicksilver ore is cinnabar; other sulfides are present in small quantities. Mining, other than a single placer deposit of cinnabar, was underground. There is a high probability of undiscovered high-grade ore which could be found and exploited using modern techniques.

Mining operations resulted in mercury pollution of the Guadalupe River and South San Francisco Bay, impacting birds and aquatic species. Responsible parties have agreed to a settlement of approximately US$6,750,822 for restoration projects.

The entrances to the mines are closed off. After being identified as a Superfund site and after subsequent containment activities, the mining area can now be visited as part of the Santa Clara County Almaden Quicksilver County Park. It was declared a National Historic Landmark in 1961. By the time Santa Clara County bought the mines in 1976 and ended operations, 1,137,727 flasks (A flask is a 76-pound (34.46 kg) unit of mass used to measure liquid mercury) totaling 83,974,076 pounds (38,090 metric tons) of mercury (worth more than US$70 million) had been extracted.

The remains of a variety of structures left over from the 135 years of mining activity, including housing for the up to 1,800 miners, are scattered about the park, with the biggest concentration at what was known as English Camp, established by Cornish miners in the 1860s. Some structures were built later by the U.S. Army Corps of Engineers and there is a memorial honoring the Civilian Conservation Corps firefighters who were stationed there for a time.

There is also a museum adjacent at the site. 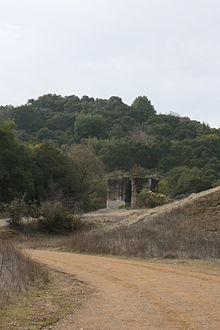 Almaden Quicksilver County Park is a 4,147 acre (17 km²) park that includes the grounds of former mercury ("quicksilver") mines. The park's elevation varies greatly: the most used entrances (on the east side of the park) are less than 600 feet (183 m) above sea level, while the highest point in the park is over 1,700 feet (518 m) above sea level. During the coldest storms of the winter season, it is not uncommon for the high summits to receive a light dusting of snow (which usually melts by noon). The park is owned and managed by the County of Santa Clara and its grounds also include the Guadalupe Reservoir; adjacent to the park is the Almaden Reservoir. The Casa Grande Almaden Quicksilver Mining Museum is located nearby.